Better for me if you don't understand...

Life is good in Seoul during the Spring.
(I wish it could last forever... 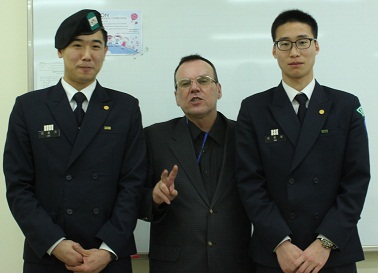 These guys (Lee and Kim) look taller than me but are NOT!
I'm actually kneeling down in this picture. 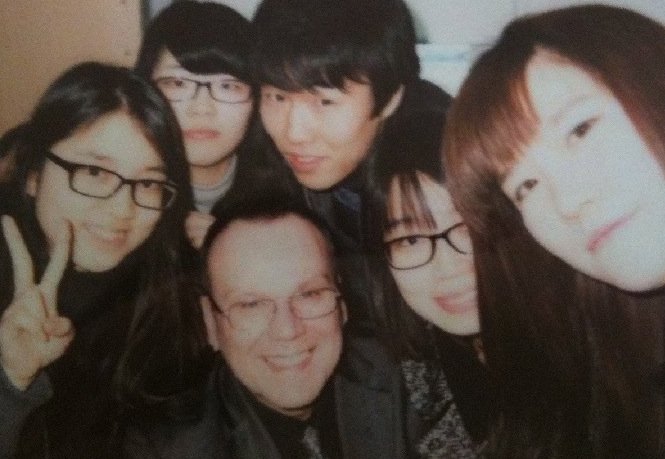 Me, April, Iffy, Terry, Kelly and Kasey... they're so young and good looking but do I look fat in this picture? 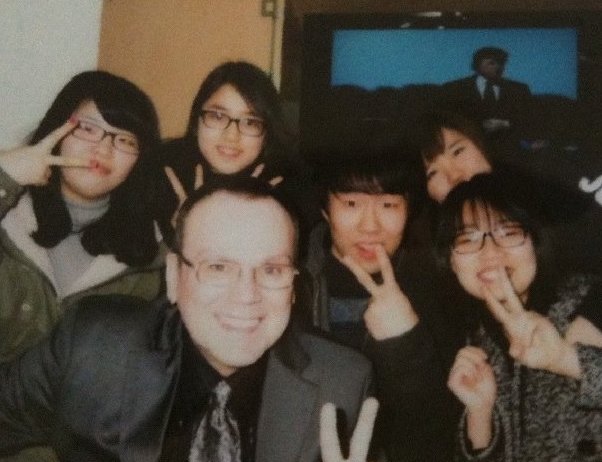 Me, Iffy, April, Terry, Kasey, Kelly and The Donald!  I hope they use my advice to get great jobs!

The STEP Beyond Winter Program 2010 was a success.  The students were absolutely awesome!  I will miss them forever... 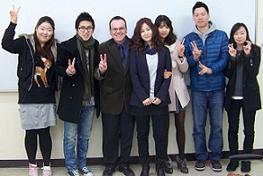 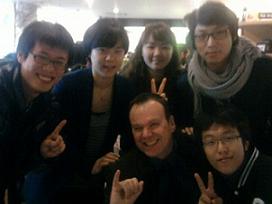 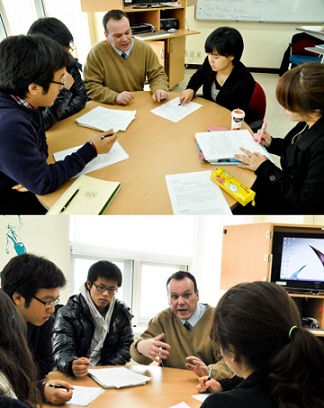 My students love me.  Can anybody blame them?

This picture was taken before I had my teeth fixed. 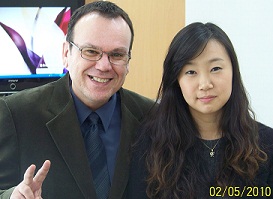 Well, here I am at Seoul Tech University enjoying perhaps the best summer program I have ever had the pleasure of participating in. The students were absolutely wonderful.  The Seoul Tech campus is literally beautiful and natural in its scenic landscape.

Kim Jun Hyung, one of my favorite students from Korea National University of Arts (KNUA) recently went on an 'MT' with his fellow classmates to the Chinese - North Korean border.

He sent me these awesome pictures.

Scenes of the Great River Ab-Rok

North Korean girls singing (gee, they look so pretty to me!)

Wow! Another year, another semester and another great group of cool students!These dudes are from the Mechanical Engineering  Department at Korea University. They really dig my class and my haircut!  Can anybody blame them?

Sometimes it just feels as if
everybody wants to steal my mojo!

This is my new motorcycle.  I just love riding to Korea University and seeing my most brilliant students every morning.  Can you tell what model of motorcycle I'm riding?

I spent some of my summer vacation 2007 in Cambodia.  I went to Angkor Wat and Angkor Thom, 2 of the most ancient and beautiful temples in the world.

Here are some pictures of Angkor Thom.

Well, many students have been asking me about my dog.  I have often mentioned in class that one of my favorite hobbies is walking my dog around town.  So, here is a recent picture of my boy, Ziggy.  He's 1 year old.

Well, in teaching, students come and go. Trust me, all teachers remember each and every student that they ever taught. Some students, we wish to forget but can't, and some, we dearly miss like our very own children. I have a feeling I'm going to miss these new students as if they were my very own children.

They were my students for only 1 month but I'll never forget their friendliness, good nature and interest in my class. The very best luck to them in their future studies and life...

This, of course is me. Although I seemed happy at the end of the semester, I truly missed all my students that year. It was an outstanding year for me at Korea University.

Mean while, back on the ranch...

Natasha is holding the baby and Vennesa is posing for the webpic. Nice big backyard you got there, Sister!

Ok, I know this guy but who's the cutie with him? This is Paul my nephew/Godson. He's cool and I swear he's a lot better looking in person, too!

I don't have many nieces so I love and deeply miss them all. Tabatha is my 1st born niece and she's holding my adorable grand niece. They're so cool, baby...

They're building a new religion. I swears they be!

Well, my oldest brother John and sister-in-law Joan sent me these great pictures of their recent winter vacation in Jamaica.  I'm so filled with envy at the possibility that they paid for my long lost nephew(Michael) and perhaps his babe instead of inviting me and my family! Yeah, yeah, yeah, I know, 'after all, he's his son and you've got your own life...blah blah blah...'

Hey, Joan, where are you going on such a beautiful day?

Knock it off, big guy! That's how tsunamis start!

I swear to God if I ever catch you 2 on the street, I'm going to kick your asses until you say 'UNCLE!'

What a great idea!  I've been watching it here in Korea and since the Koreans are doing so well, it makes watching all that more exciting.  I saw the game where Canada actually beat the USA.  I also saw the game where Canada was overwhelmed and beat out of the competition by Mexico.  What does that say about the USA team?  The USA play Mexico tomorrow in a must win game to advance to the WBC semi-finals.  I can't remember being so excited about watching a baseball game than this one.  Roger Clemens is pitching for the USA and he's one of my all-time favorite pitchers.  It's gonna be a dandy, baby!

Here, on a more serious note, while I was watching the BIG Korea vs. Japan WBC showdown today with a few of my students, we saw two Korean fans in the stadium with large signs that read 'Dokdo is a Korean Island!'  I wasn't sure if that was the case until my students explained to me in detail exactly why most Koreans are so serious and feel so strong about the politically tense and emotionally charged controversy.  Thanks to them, I tend to agree with the Korean position now.

Good luck to the USA team tomorrow and Good Luck to the Korean team in the semi-final round.

Habs on the war path?

Well the Montreal Canadiens are back on ice after the lengthy NHL walk out.  They are doing better than I expected.  They are currently in 2nd place in their division and 4th place overall.  I hope it lasts, in fact I hope they finish in 1st place and win the Stanley Cup.

Well, Jay, whoever you are, you've got a cool site. I hate you. I hate everybody that has a 'cooler' site than me except my nephew, Ryan.

out of the blue, baby

I seldom wonder why I became an ESL instructor. In fact, I probably wonder why as much as you wonder why I became an ESL instructor. I love teaching English. It's a challenge as much as a pleasure. I'm starting a new semester with all the hopes, dreams and expectations that this semester will be the best semester in all the 13 plus years I've been teaching. I've got a great group of bright students that are starting off well motivated and eager to learn what I will be teaching. Got my fingers crossed that this semester will be a total success for me and my cool students.

I know what you're wondering because I'm wondering the same thing. Why does it rain so much during the 'moonsoon season' in Korea? I ask myself this question everytime I decide to stay in Korea during my summer vacation. It's not that I regret it, I just wonder why.

Hi Nina! Thanks a lot for remembering my birthday. The funny thing is that I always forget your birthday even though you're my only sister. Still love the hell out of you, though.

Bravenet Blog
Get One For Free!
powered by